This is a nineteenth-century colonial Mexican devotional image, used by the Church as a didactic tool to teach new converts about the role of saints in Christianity. The subject matter, which is the sacrament of Last Rites, or confession on one’s deathbed, educates the faithful about obtaining forgiveness for one’s sins in order to merit entrance into heaven. These visual representations of Christian doctrine would have been instrumental in bridging the language barrier between Spanish conquistadors and native peoples in the early years of the conquest. 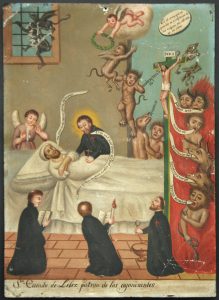 Traditionally, in Spain, retablos were painted on wood or other, cheaper materials, but with the easy access to metals in the New World, this Mexican retablo was painted on tin. This access to new materials in the New World made retablos much more durable and much easier to produce. In Spain, retablos were typically larger paintings, up to forty feet tall, only found in churches, but in the New World, they were created on a much smaller scale. This Mexican retablo is only ten by fourteen inches, making it much more portable. 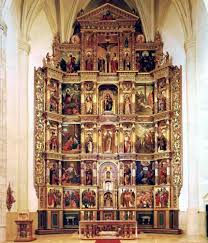 The scene is divided horizontally, with the holy men bearing the red cross of Saint Camillus of Lellis on the left section, and the demons of hell being driven away by the crucified Jesus on the right. The speech scrolls convey the message that the dying man has confessed his sins, and the demons that had come to steal his soul feel cheated, as Jesus’s forgiveness has robbed them of a soul for hell. The speech scrolls contain the phrases “In the aria the / the sinner will get / your guilt I forgot / all of them.”, “It weighs me in the soul of the offended.” and “I believe in God I love God I wait in God I trust in God .” In the top center of the retablo, an angel emerges from the demons to place a laurel on the head of the dying man, a symbol given to holy men upon their death and indicates that he is going to heaven. The panel uses predominantly neutral colors, but draws attention to important symbols by using green and red and contrasting the colors of the crucifix with those of the fires of hell. The color yellow is also used, but only to denote Saint Camillus’ halo, a symbol of his sainthood. There is a strong contrast between the darker, savage, hairy, unkempt demons and the pristine, smooth, lighter colored angels, drawing a visual distinction between good and evil. The work also uses a distorted perspective, as the viewer is looking down on the dying man and saint, while a different, lower perspective is used on the holy men, who seem dwarfed by their surroundings and disproportionate, as they are no taller than the bedside. This distorted perspective suggests that the purpose of the panel is didactic, as it is more concerned with showing the important elements of the scene clearly than simply recording a scene exactly as it would appear. 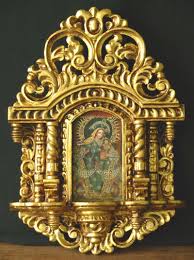 This Mexican painting is representative of the style of Spanish colonial Christian retablos. Religious scenes made up a majority of the art being commissioned in nineteenth-century Mexico, and this religious imagery was intended to be didactic and easily reproduced so it could be distributed to Christian pilgrims, giving them a closer connection to the saints. The style of this painting reflects its purpose. The use of oil on tin, a metal that was cheap and readily available in the colonies, creates a smooth matte look because the oil paint does not fuse to the surface of the tin like it would on canvas. This flattening effect coupled with the almost invisible brush strokes creates a homogeneous effect on the painting. The style in which the figures are portrayed is common in Spanish colonial paintings, as many mass reproduced retablos were made by amateur painters. The human figures all have the same facial features, hair style, and expression. The proportions of the bodies are awkward, they appear stiff, and the hands are painted without detail. The naked babe in the top of the panel is painted as if it is a shrunken adult, rather than an actual baby. The painting presents an unnaturalistic perspective on the scene, a very unrealistic scene, perspective wise, as the tiles converge in the center, the figures are not proportionate to the bed, and the bed itself is too long, extending well past the pillow. Great attention to detail, however, is paid to the didactic elements in the painting, and the speech scrolls are perfectly legible. This selective application of detail suggests that the painter is calling attention to the morality and important religious subject matter of the painting, rather than trying to create a realistic rendering of a dying man’s last moments.

Retablos were panels depicting religious scenes encased in frames or elaborate backdrops behind altars. The imagery was often votive, that it would depict a person in a dangerous situation being saved by a saint or giving thanks after a miracle had been performed on his or her behalf . This particular panel is a votive object, or ex-voto, as the dying man’s soul is being saved by Saint Camillus of Lellis, the patron saint of dying, and this panel was probably commissioned shortly after the scene it depicts happened. Thought retablo’s were traditionally displayed behind altars, eventually they became mass produced so that Christians could build small altars in their homes in order to feel closer to the saints. This panel probably fell under the category of souvenirs that pilgrims took home from their travels to holy places. These more portable, Christian images were probably made popular in the spreading of Christian beliefs to Native Populations in the New World. Saint Camillus was a Capuchin monk who spent the first half of his life with a severe gambling addiction and fighting in several wars. It was not until he heard a sermon at the Capuchin friary at Manfredonia at age 24 that he decided to devote himself to the church. He was turned away from several monasteries due to his severe war injuries, but he was finally accepted as a superintendent at San Giacomo. While there he devoted himself to the care for the sick, emphasizing cleanliness and the performance of the last rites for all patients. He eventually founded his own Congregation, and received the miracles of healing and prophecy. 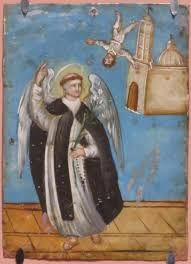 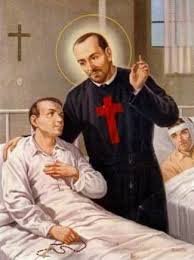