This image represents the Holy Face, one of the most significant images in Christian devotion. The story of the Holy Face is associated with the Passion of Christ. A woman named Veronica encountered Christ as he was carrying the cross, and she wiped his blood and sweat with her veil. Miraculously Christ’s face came to be imprinted on the cloth. This image was significant for believers because it provided them with tangible proof of Christ, and it gave them a concrete physical object connected to this biblical event. This specific panel would have been used as an object of devotion in a private home, reminding the owners of some of the most important events in Christianity.

The official title of this work is El Divino Rostro (Veronica’s Veil or the Divine Face). This piece was made in the 19th century in Mexico and the artist is unknown. The work consists of oil painting on a tin surface, enclosed within a painted wooden frame. In this image, we see a painted depiction of Christ’s face imprinted on a piece of cloth. The cloth has a grey border and a white center where Christ’s face is located. The top two corners of the cloth are nailed to a wooden cross. On the central portion of the cross there is a ribbon showing the letters INRI. In the upper right corner of the image there is a ladder. Hanging from the ladder is a red string or rope of some kind and possibly a white lantern at the bottom. Below that there is a black/grey figure eight object. On the bottom right corner of the piece, there is a rooster with a red head and tail, and a brown body. Directly below Christ’s face there are three black nails. On the bottom left corner of the piece, there is a white circular object with grid marks covering it. There are the numbers three and zero inside the object. There is also a wooden hammer. Above the hammer there is a green plant, possibly corn. In the upper right corner, there is a light brown sponge in a circular shape. The figure of Christ has brown hair that is parted in the middle and travels down to the tip of his beard. His beard covers the area around his upper lip, the sides of his face, and his chin. His eyes are almond shaped and his nose is elongated. All of his facial features look very sculpted. He is wearing a green crown made of thorns from which blood is dripping. On his right cheek, there is some grey pigmentation and red blood that possibly shows a wound. There is also blood coming from both his nostrils and his right ear. The entire piece is inside a blue wooden frame that is made of one piece but carved into small squares. Each square contains a geometric design consisting of a yellow square, four white oval marks, and a green x.

The religious significance relates to events that took place leading up to the crucifixion of Christ. All the objects described above are known as “instruments of the Passion” that remind viewers of important elements of the Passion narrative. For example, the rooster, the bag with 30 silver pieces, the nails, etc. are all objects associated with the events. The piece is a Christian relic of a piece of cloth, which bears the face of Christ not made by human hands. The present form was not recorded until the Middle Ages. It was then during the 14th century that it became a central icon, especially in the Western Church. The Holy Face is oil on tin in a painted wood artist-made frame. During this time, wood was used for various projects, and served more functions than any other material in northern New Spain. It was used for its beauty and strength, and painting on the wood was very common. There are multiple images connected with the Veil of Veronica, including: The Holy Face of Jaen, The Holy Face of Alicante, The Holy Face of Vienna and The Vatican Veronica. There are also multiple variations of The Holy Face connected to different traditions and cultures; however, all would be in the form of a small retablo.

Small retablos are devotional pieces on rectangular sheets of tin that illustrate holy images such as Christ. Since the piece was painted on tin, a relatively inexpensive material at the time, it is likely that the piece was usually in a home or small community. The people would have prayed in a private setting to the piece to honor the journey of Christ on his way to his crucifixion. This is an image of Christ’s face on Veronica’s veil. Later on, small oil painted retablos generated the need for factories in order to reproduce the same images, and sell to faithful followers of the Catholic Church and religion. Retablos were sold to devout believers who would then display the pieces in their own

altars in their homes. They were mostly used to honor the saints.

The blue in the frame represents “…Heaven, truth, hope, and spiritual love, is always associated with the Virgin in her role as Queen of Heaven.” The gold on the frame “symbolizes celestial light, beauty, perfection, incorruptibility, spiritual virtues, and eternity.” The red blood dripping from the face of Christ is, “associated with emotions, royalty, divine love, faith, charity, and the Holy Spirit.”

La Mano Poderosa, also known as the Powerful Hand, represents a significant element of colonial life in parts of the Americas. The symbol of the hand of Christ was introduced by the Spanish missionaries and has important spiritual value among the faithful colonials who valued rich and robust Catholic traditions. The image was designed to convert the native peoples, as Catholics attempted to spread Christianity throughout the Americas. The image symbolizes an idealized family structure, and what families in the Colonial America’s aspired to be. It was also significant because of the juxtaposition between the godly aspects of Christ evident through the tools of torture which represent his sacrifice, as well as his more human side through his family. 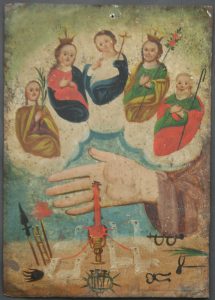 This image of the Powerful Hand was made in Mexico in the 19th century and was created using oil paint on tin. It was created to serve as a religious work of art for a more domestic setting. The small scale of the image prevents it from being capable of viewed by large crowds in a church; it could be best viewed by a small group of people, perhaps a family. The image shows the power of Christ, and reminds the viewers of his strength through the symbols of torture scattered across the bottom. The hand of Christ is a protective symbol, that may have been designed to protect the family and the home in which it was placed. The instruments of torture associated with the death of Christ were powerful objects that reminded viewers of the suffering of Christ to protect humanity from its sins. The figures in the highest register of the painting serve as hope for salvation and welcome them into heaven among the Holy Family.

The image of the Powerful Hand uses three horizontal registers to separate the content of the piece. The painting shows a flock of sheep, a blood-filled chalice, and five figures dressed in garb that hints at their biblical nature, such as a nun’s shroud and a shepherd’s robes. This also indicates a culture of humility and simultaneously represents the Catholic desire for functionality and modesty. In the upper portion, the five figures shown represent the extended Holy Family, placed in the clouds to represent their status as holy beings. The central figure is Jesus, Mary and her mother Anna to his left, and Joseph-holding the flowering staff, a symbol of his marriage to Mary- and Mary’s father Joachim to Christ’s right. At the bottom of the frame, seven lambs are shown drinking from a chalice, surrounded by dark instruments of torture. In the central register, the hand of Christ is depicted. The hand is a representation of Christ’s suffering and the blood pouring from its center flows down into a Holy Grail, which feeds the lambs below.

The style is simple, with a basic composition and emphasis on strong colors to create visual interest. In terms of style, all five figures are painted in the same way, as they each have very round, cartoonish faces, with simple expressions, and can only be differentiated based on the symbolic objects they hold. Christian texts did not have many physical descriptions of these religious figures, so the artist may have chosen to paint their faces simply, almost generically, because there were no details to incorporate into the painting. The family members are depicted using bright colors that supplement the hand as the focal point of the image. The Powerful Hand conveys a somber and ominous tone in the lower register through the use of dark colors. On the ground there are a variety of symbols representing the torture devices that were used against Christ during the Crucifixion, including the crown of thorns and palm leaves. The surrounding lambs represent the followers of Christ that were saved and nourished by the blood shed from his Crucifixion, as well as a representation of the Eucharist. The lambs are painted in a very light white, that makes them almost transparent, and sharply contrasts with the dark coloration of the torture devices that surround them. The artist likely used translucent lambs to emphasize the blood’s brightness and add an unreal and dreamlike aspect to the image.

The image incorporates relevant Bible aspects such as Holy Family, torture instruments and Christ’s hand. The figures upon the highest register of the painting serve as hope for salvation and portray a sense of welcoming into heaven from the members of the Holy Family.  The ideal family is represented through the Holy Family and serves as a model which native peoples in the Americas were encouraged to emulate. They are a religious and benevolent family, always in the service of God and serve as symbols of hope for salvation into heaven. The extended holy family are depicted as simple and humble people, shepherds and priests, who follow the teachings of the Bible and dedicate themselves to being good Christians. In addition to their piety, good Catholics are modest and fearful of God. Their fear leads them to avoid sinning in order to gain entry into the Kingdom of Heaven. Individuals looking at the image would be reminded of the power of Christ and communicate with Him through prayer.

Christianity and successful missionary attempts of conversion had a strong impact upon the people and culture in the Colonies of Central and Southern America. People expressed their devotion through adherence to core principles and by following the Holy Family as the ideal family structure.In the process of using visual propaganda in order to persuade the natives, this artwork was used to remind the populations of the sacrifices of Christ as a savior, as well as appeal to the emotional aspects of a family.